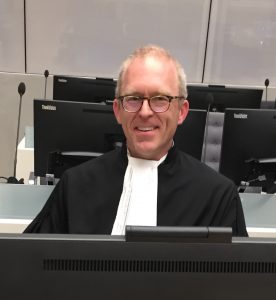 Darryl Robinson at the hearing

12 September 2018 – CPIJ Co-Researcher Darryl Robinson was yesterday before the International Criminal Court (ICC) to orally present Amici Curiae observations on controversial questions arising in the Al Bashir case. The Court’s decision will be of particular importance as the issue at stake, namely the question of immunities of heads of States, has been the subject of a heated debate over the last years.

President Omar Al Bashir of Sudan, accused of genocide and other crimes perpetrated in Darfur, is the object of an arrest warrant by the ICC. Following the failure of some States, including the Hashemite Kingdom of Jordan, to arrest him, the ICC rendered a decision in which it ruled that immunities of heads of States cannot be invoked to justify an absence of cooperation with the Court. Jordan appealed of this decision. It is in this context that on 18 June 2018, Darryl Robinson and a group of experts including members of the Canadian Partnership for International Justice were invited to submit Amici Curiae observations to the ICC concerning the appeal filed by Jordan. The Amici, namely Darryl Robinson, Fannie Lafontaine, Valerie Oosterveld, Margaret M. deGuzman, Robert Cryer and Carsten Stahn, argued that Al Bashir has no immunity before the ICC, in accordance with the interpretation adopted by the Pre-Trial Chamber.

On behalf of this expert group, Mr. Robinson, alongside with other Amici, was asked to orally present the Amici’s observations at a hearing before the ICC. The Partnership is proud to actively contribute to the making of a decision of the highest importance in the Court’s history with its Co-Researchers spearheading the development of complicated judicial advices.

More information about the Amici Curiae is available here.