48th Annual Conference of the Canadian Council on International Law

The members of the CPIJ will present a panel on October 25.

On June 3, 2019, after three years of hearing thousands of stories of systemic and structural violence, Canada’s National Inquiry into Missing and Murdered Indigenous Women and Girls reached the “inescapable conclusion” that Canada as a state is responsible for an ongoing genocide of Indigenous peoples. The Inquiry found that this ongoing genocide constitutes a root cause of the violence that is currently being perpetrated against Indigenous women and girls. Colonial violence is ongoing, not just a legacy of the past.

The Inquiry’s final report is supplemented by a legal analysis on genocide, which specifically tackles this issue. It upholds that the true nature of genocide is distinct from the popular notions of it. Colonial genocide, i.e., genocide perpetrated in a colonial context, is a slow-moving process, unlike the traditional paradigms of genocide that are the Holocaust and the genocide in Rwanda. A gendered lens allows to adequately frame the elements of genocide, and sheds light on the gender-specific impacts it has on women and girls.

This panel will discuss the place of colonial genocide in international law in the wake of the National Inquiry’s works, and foster discussions on the active decolonization process that is needed in order to address Canada’s ongoing colonial genocide.

Look up the program. 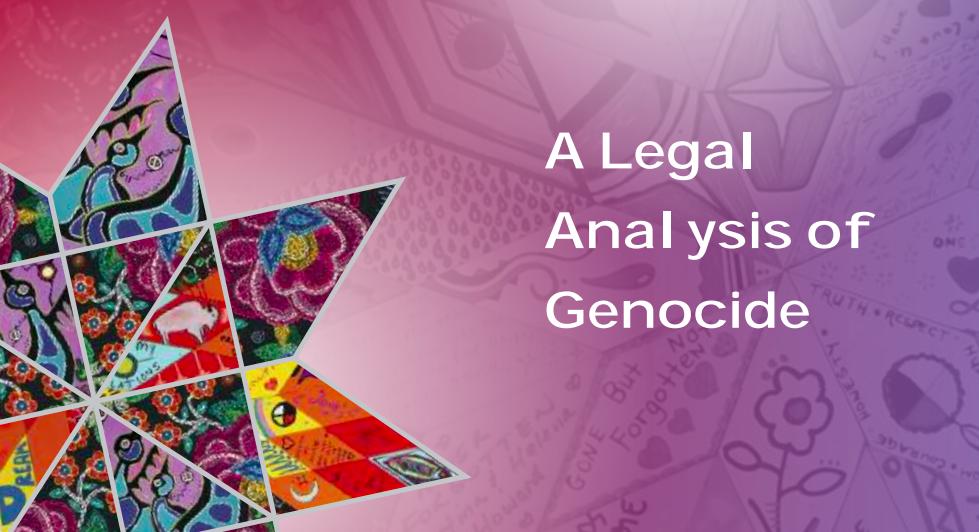 In December 2017, the U.N. stated that the world “cannot rule out the possibility that acts of genocide have been committed” against the Rohingya in Myanmar. What can be done about these ongoing human rights violations, and how can we help the Rohingya?

Hear Canada’s Special Envoy to Myanmar, the Honourable Bob Rae in conversation with Payam Akhavan, Professor at McGill University’s Faculty of Law, as they discuss these important questions.