By Catherine SavardSeptember 27, 2018CPIJ in the Media, News

By Ernesto Londoño and Marlise Simons | The New York Times 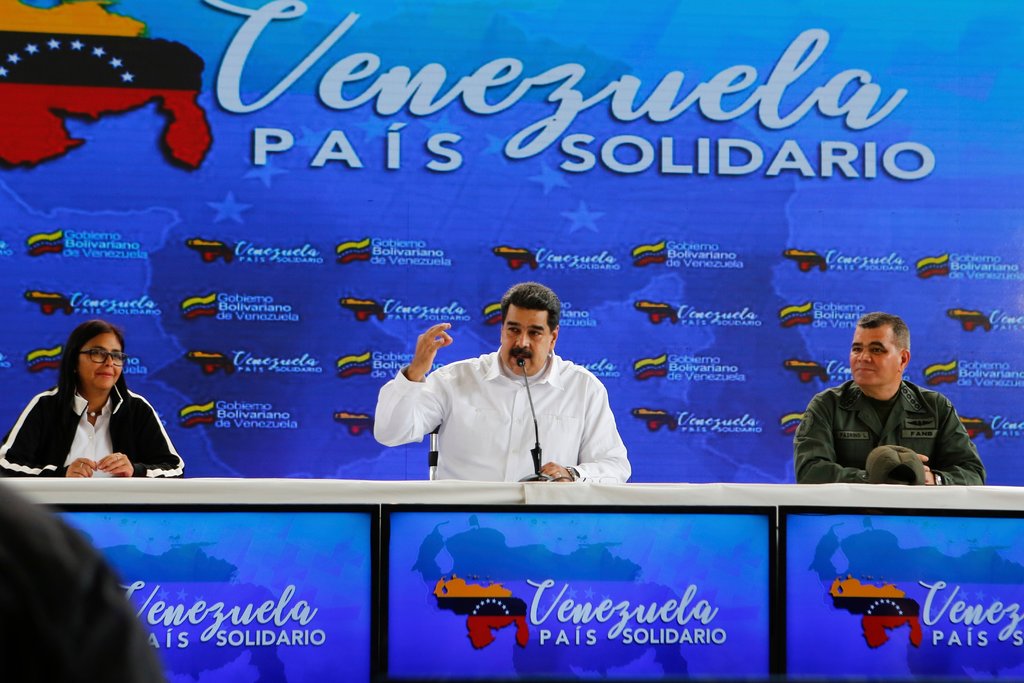 Five Latin American countries and Canada on Wednesday urged the International Criminal Court to consider prosecuting senior officials in Venezuela for extensive human rights abuses, the first time that member nations have referred another member to the tribunal.

In a region where leaders tend to avoid criticizing one another publicly, the step by Argentina, Chile, Colombia, Paraguay and Peru represented an extraordinary rebuke of President Nicolás Maduro.

Governments in the region have become increasingly alarmed about the economic and political crisis in Venezuela. Acute shortages of food and medicine have prompted millions to migrate, largely to neighboring countries.

The referral gives The Hague-based tribunal a renewed sense of urgency to investigate abuses in Venezuela.

“The leaders of these six countries have taken a historic step today, unprecedented in the history of the Americas, creating a crucial milestone in the interests of justice, accountability, non-repetition and reparation to the victims of the Venezuelan dictatorship,” said Luis Almagro, the secretary general of the Organization of American States, in a statement.

Here are some facts about the referral to the international court and what it could mean for Venezuela:

Why did the other countries refer Venezuela? 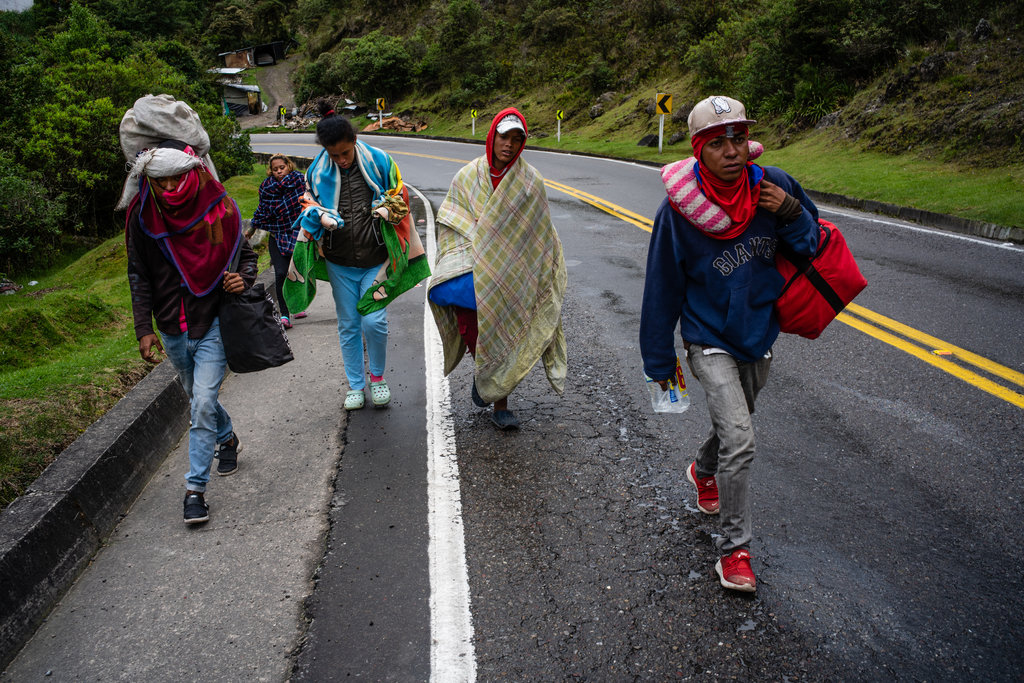 They’re overwhelmed by the unrelenting exodus of Venezuelans, which has accelerated amid soaring inflation. The United Nations estimates that 1.6 million Venezuelans have left since 2015 and that as many as 1.8 million could migrate this year.

In recent years Venezuela’s neighbors have had an open-door policy, but it has come at a political cost as communities feel increasingly besieged by migrants, many of whom arrive with no savings and with serious health problems.

“The magnitude of this exodus is unprecedented in our region,” President Martín Vizcarra of Peru told the United Nations General Assembly on Tuesday, noting that his country has taken in some 450,000 Venezuelans. “It demands collective action by the international community.”

How unusual is this step? 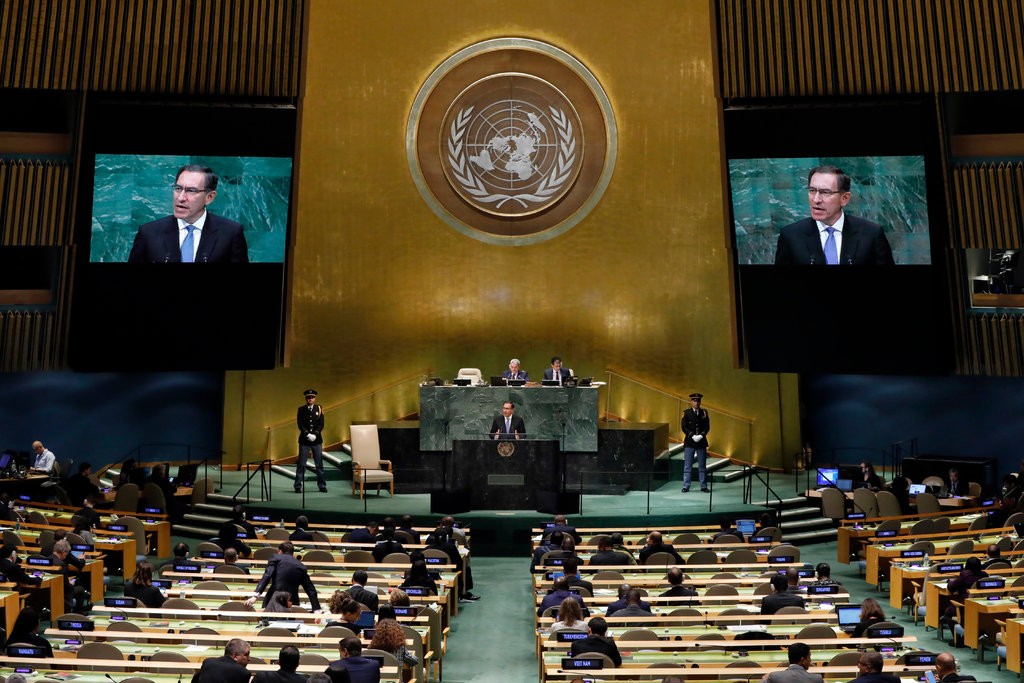 “The magnitude of this exodus is unprecedented in our region,” President Martín Vizcarra of Peru told the United Nations General Assembly. (Photo by Richard Drew/Associated Press)

Highly. The court has never opened a case brought by one government against another, and governments in Latin America for decades have adhered to an unspoken rule: Stay out of the messy internal affairs of neighbors. But several have begun to see Venezuela’s economic unraveling as a growing regional threat. The tide of migrants has led to spikes in crime and strained the health and education systems of other countries.

“This is a significant, historic event,” said Fernando Cutz, a former senior White House official who worked on Latin America policy in the Obama and Trump administrations. “Ten years ago, it would have been impossible to think of the region turning on one of its own.”

What’s the gist of the referral? 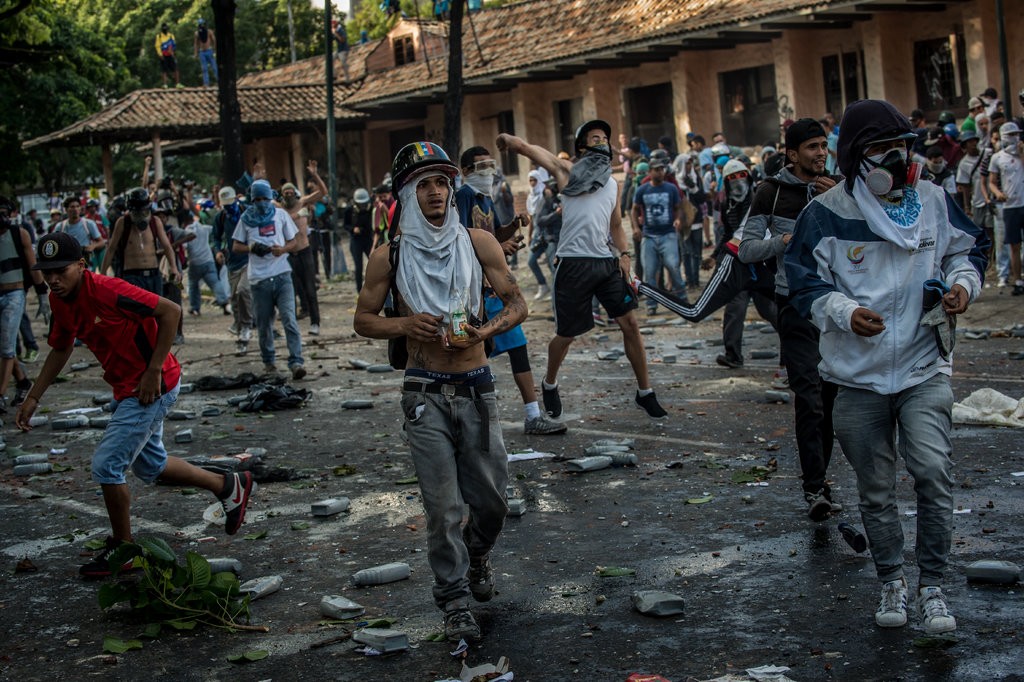 In a letter signed by the six heads of state this week in New York, on the margins of the United Nations General Assembly, the countries asked the international court’s top prosecutor, Fatou Bensouda, to investigate human rights abuses committed by the Venezuelan government since February 2014. During that month, the government used harsh tactics to clamp down on mass protests.

The letter notes that human rights experts have documented abuses that include arbitrary detentions, extrajudicial killings, torture and sexual crimes. 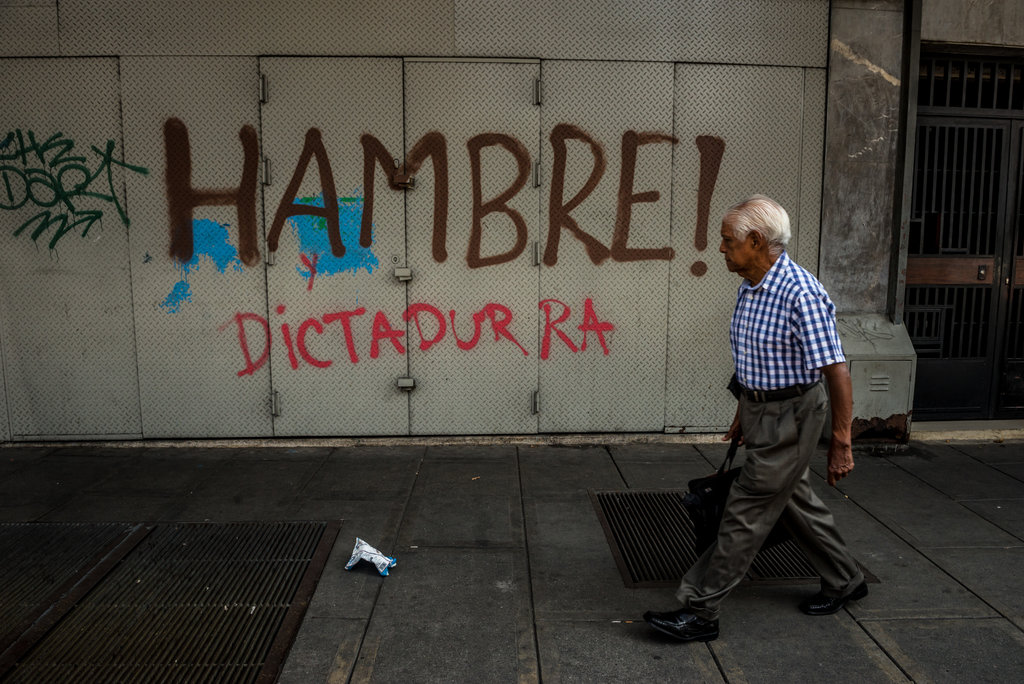 “Hunger!” and “Dictatorship” are scrawled on a security door in Caracas. (Photo by Meridith Kohut for The New York Times)

Yes. Ms. Bensouda announced in February that her office had launched a “preliminary examination” into allegations of large-scale human rights abuses in Venezuela. That step can lead to a formal investigation and criminal charges.

The court said it is investigating allegations that security personnel have used excessive force against demonstrators, detained members of the political opposition and subjected prisoners to “serious abuse.”

The court was established in 2002 as a tribunal of last resort for war crimes, genocide and crimes against humanity. Since its inception, it has indicted only Africans and has won only a handful of convictions.

How long will an investigation take? 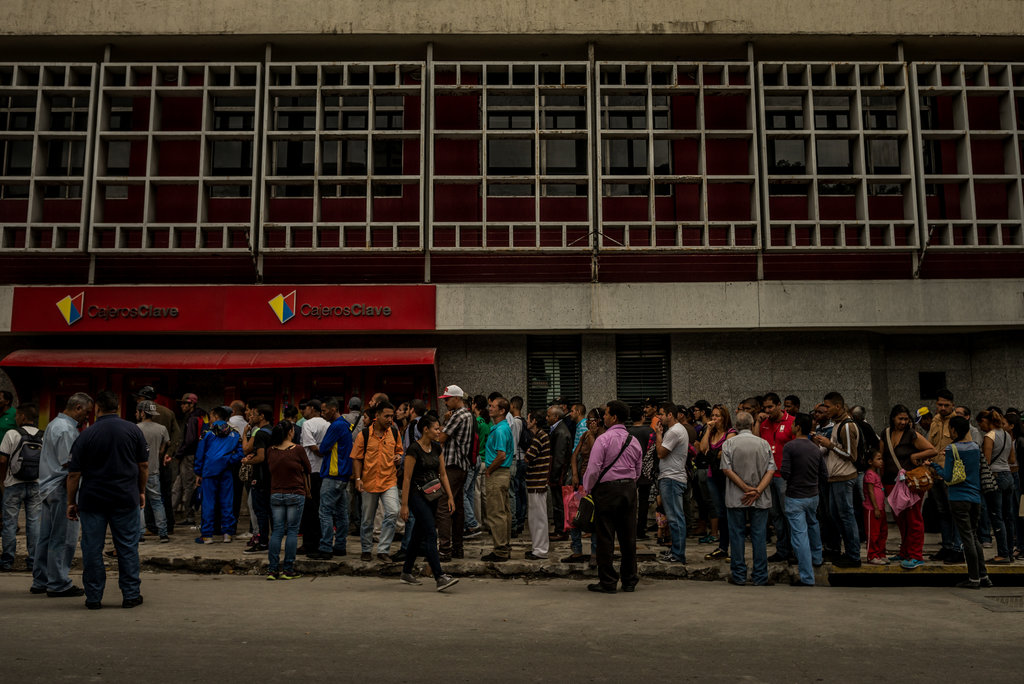 Venezuela issued new currency in response to runaway inflation. People waited in long lines last month in Caracas to get the bills. (Photo Meridith Kohut for The New York Times)

It’s unclear. Court investigations have tended to last for years, and experts said it would be highly unlikely for charges to be filed any time soon.

“Time frames at the I.C.C. are measured in years, not months,” said Todd Buchwald, a former senior State Department official who oversaw global criminal justice matters from 2015 to 2017.

But the sense of urgency conveyed by neighboring countries may prompt the court to make the case a priority. 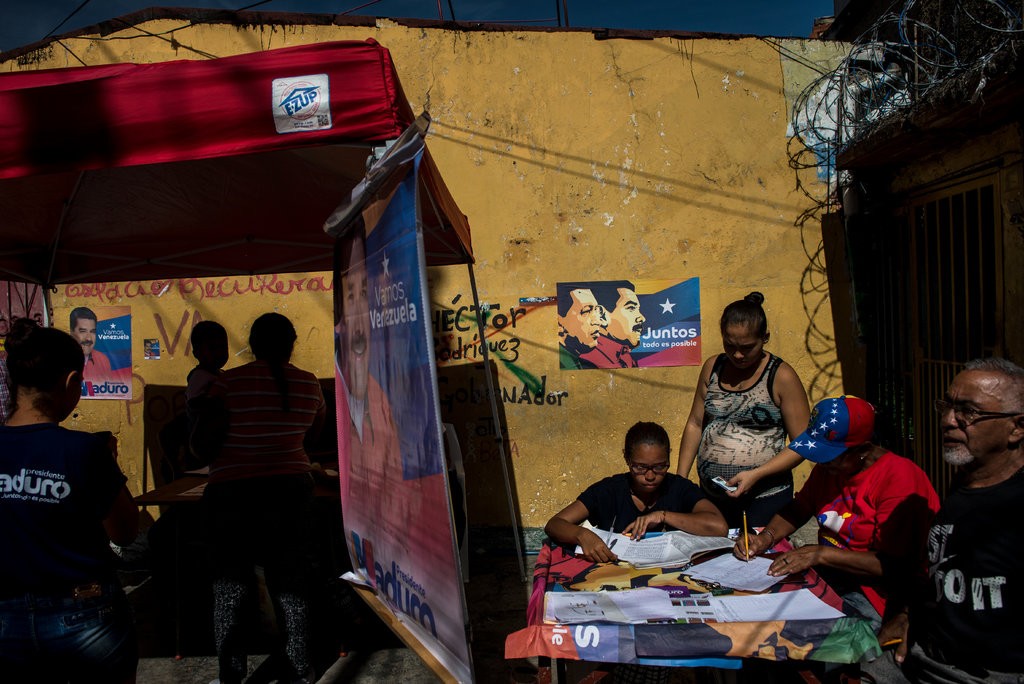 “It does telegraph to the prosecutor these states are keen to provide access to people who have fled” and may have relevant information, said Joanna Harrington, a law professor at the University of Alberta who specializes in international criminal law.

Several of Venezuela’s neighbors have sought to isolate Mr. Maduro’s government as he has become increasingly authoritarian in recent years.

They also have tried to create rifts within Venezuela’s ruling party.

The threat of being prosecuted in The Hague “will most likely galvanize those in the inner circle to pull together,” said Mr. Cutz, the former White House official. But it could prompt others on the periphery of power to turn on the government, he added

What is the Trump administration’s position? 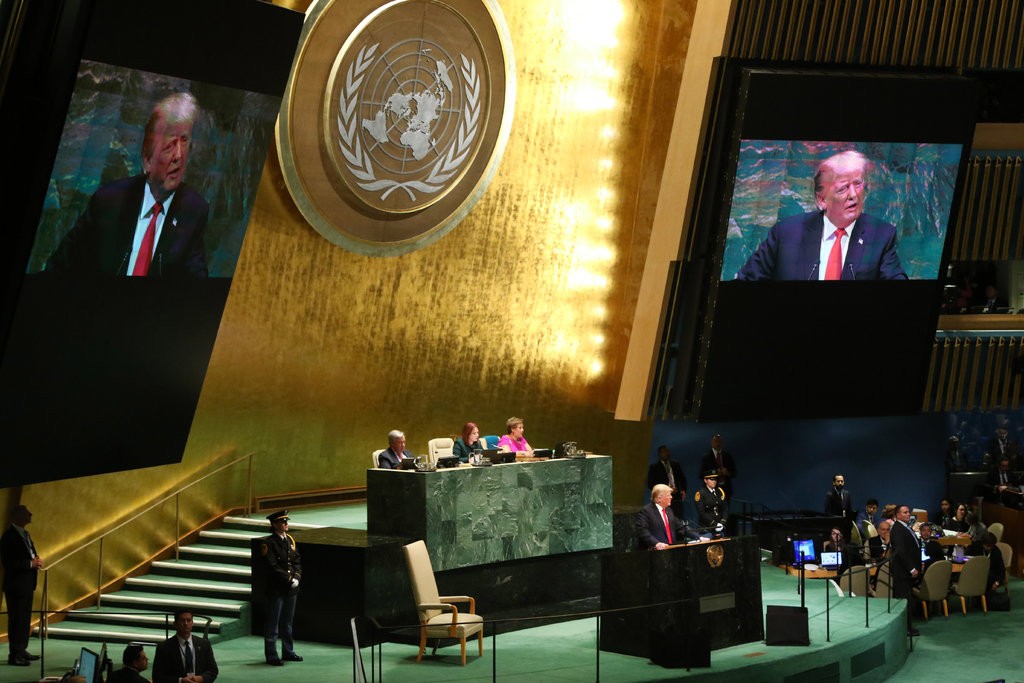 President Trump described the crisis in Venezuela as a “human tragedy,” but he also challenged the authority of the International Criminal Court. (Photo Chang W. Lee/The New York Times)

Washington has long called on Latin American leaders to take a harder line against Venezuela. But Wednesday’s referral to the court is not a move the Trump administration can endorse.

During his speech to the United Nations General Assembly on Tuesday, President Trump described the crisis in Venezuela as a “human tragedy.” But in the same address he also lashed out at the International Criminal Court, saying that “as far as America is concerned,” the court has “no legitimacy and no authority.”

This echoes comments made this month by John R. Bolton, the national security adviser, who called the court “ineffective, unaccountable, and indeed, outright dangerous.” Mr. Bolton’s criticism was in response to a preliminary review of allegations of abuses in Afghanistan, which may include acts committed by American military or intelligence personnel.

The State Department would not specify whether the United States supports efforts to hold Venezuelan officials accountable at The Hague.

“We encourage thorough and transparent investigations into all credible reports of abuses,” the State Department said in a statement. “The crisis in Venezuela will only be resolved through the restoration of democratic governance, realistic economic policies, the rule of law, and respect for fundamental human rights and freedoms.”