By Catherine SavardSeptember 26, 2018CPIJ in the Media, News 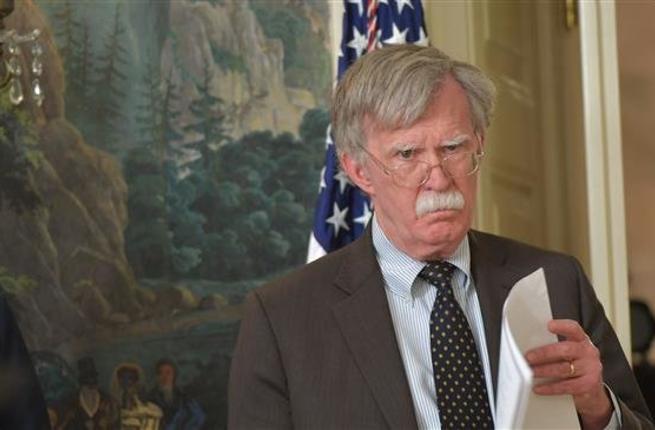 US National Security Adviser John Bolton listens as President Donald Trump (not seen) speaks on April 13, 2018 at the White House in Washington, DC. (Photo by AFP)

23 September 2018 – The anniversary of September 11th might seem like an odd time for the United States to choose to slam institutions championing international cooperation and justice. But John Bolton did it. President Trump’s National Security Adviser told an audience at the Federalist Society in Washington DC:

If the court comes after us, Israel or other US allies, we will not sit quietly. We will respond against the ICC and its personnel to the extent permitted by US law. We will ban its judges and prosecutors from entering the United States. We will sanction their funds in the US financial system, and we will prosecute them in the US criminal system. We will do the same for any company or state that assists an ICC investigation of Americans.”

Apparently, his speech was in reaction to the news that the International Criminal Court’s (ICC) Pre-Trial Chamber would soon decide whether or not to investigate suspected war crimes in Afghanistan.

Bolton’s anger toward the court is ideological. He has an anarchic view of the international arena, and sees international legal restrictions as infringing on American sovereignty. He is especially angered by the fact that the ICC is, in theory, able to investigate and charge American citizens with war crimes, despite the fact that America “unsigned” itself from being party to the court’s founding treaty, the Rome Statute.

The ICC was always going to present moral conundrums. It was set up with the aim of prosecuting the most extreme war crimes and crimes against humanity. It is supposed to level the playing field in places where civilians have fallen prey to a predatory state that would purposely deny them justice, or when the state cannot deliver justice on its own.

States can request the ICC to investigate crimes in their territory on their behalf. The United Nations Security Council can authorise an ICC investigation. Or, the ICC can begin an investigation itself, so long as the Chief Prosecutor and a team of judges in the Pre-Trial Chamber both authorise it. Before they do this, they need to have robust evidence that war crimes, genocide or crimes against humanity were likely committed. And they need evidence that justice has still not been properly served by the countries in question.

What’s interesting about Bolton’s speech is that he makes the ICC out to be an unstoppable, unconstrained power, and a serious threat to American servicemen, who might be arbitrarily prosecuted at any moment for doing their jobs. He said that the ICC paves the way for anti-American “political trials”.

Not all Bolton’s points about the ICC are overblown. He rails against American citizens being subject to a judiciary that neither they nor their government elected to be a part of – a legitimate line of moral argument. However, to imply that the ICC can subvert American interests or foreign policy is a huge overstatement of the court’s capabilities.

The ICC cannot prosecute countries or institutions, only individuals. True, in some cases it has gone after heads of state. But any case against America would in all likelihood centre on the actions of individual American soldiers. Whether or not the ICC should be able to try them is a matter of opinion, but their conviction would hardly be an existential threat to American power. Even if an investigation into war crimes in Afghanistan were to be opened, there is no guarantee it would sweep up American soldiers. Sergey Vasiliev, a Professor of International Criminal Law at the University of Leiden told Al Bawaba:

“For the first cases in Afghanistan, the Prosecutor is highly likely to concentrate on actors other than US forces, as a matter of strategy. I do not exclude that this Prosecutor (or her successor) might also eventually decide to prosecute members of US military, even though this will be more of a symbolic gesture because the execution of arrest warrants would pose serious problems lacking cooperation by the US and all countries which pledged not to surrender US citizens to the ICC pursuant to bilateral agreements. But, as matters stand, I do expect a handful of cases involving mid-level non-US figures being brought in the next few years – if and after the judges give the green light to investigate.”

Bolton’s suggestion that the ICC could pursue a “political trial” against the United States as and when it liked is also clearly false. One can make many criticisms of the ICC, but it cannot be said that they take decisions lightly. For context, the preliminary investigation into Afghanistan has gone on for over a decade. This is not an official investigation – it is the groundwork to determine whether or not there is enough evidence of relevant crimes, and a lack of alternative justice, to merit starting an investigation. And the nature of the ICC’s work means that they can expect political backlash every time they open a new case.

To put it another way, unless there was practically watertight evidence that at least some individuals had committed war crimes, it is highly unlikely that the ICC would risk investigating.

Hence came a November 2017 announcement from ICC Chief Prosecutor Fatou Bensouda that there was a “reasonable basis to believe war crimes and crimes against humanity were committed in Afghanistan and that all sides in the conflict would be examined including members of the US armed forces and Central Intelligence Agency”.

On this basis, she asked the team of Pre-Trial Chamber judges to authorise an investigation into war crimes in Afghanistan. Their answer is still pending. Sergey Vasiliev added:

“The Prosecutor’s request has been pending before the Chamber for 10 months now. This is a very long period for the Court, which has given rise to speculations about the reasons for this delay. Rumours have circulated for a while that the judicial decision was imminent, but it may well turn out to be the case this time.”

It is the anticipation of this announcement that seems to have prompted Bolton’s diatribe, along with the extraordinary threats to sanction the ICC and subject its staff to American criminal justice. The question is whether these threats will deter an investigation into Afghanistan. It is rather unlikely that Bolton’s threats will make much difference, for it would do the ICC far more harm than good to be seen to acquiesce to his threats.

Amanda Ghahremani, an international criminal lawyer and the Director of the Canadian Centre for International Justice told Al Bawaba:

“It is highly unlikely that the ICC would capitulate to such pressures by the U.S. administation, because the Court could be perceived as lacking independence and impartiality. In light of the circumstances, the Court will likely have to make a decision soon on the situation of Afghanistan, and if it chooses not to proceed with a formal investigation, it will have to provide very clear and legally sound reasons for not pursuing an investigation to avoid being perceived as succumbing to political pressure.”

The ICC’s dilemma is that it has to be seen to go after the powerful to be credible, and so succeed in deterring future war crimes. But the powerful are very determined to prevent the ICC doing just that. One of the most hypocritical moments of Bolton’s speech was when he repeated the criticism that the ICC’s focus has overwhelmingly been on Africa.

It is perfectly, and troublingly true that ten out of eleven of the ICC’s current investigations are in Africa, and this prompted plenty of skepticism that the court was indeed – as Bolton put it – “…just the latest European neocolonial enterprise to infringe upon their sovereign rights”. The court’s excessive focus on Africa is legitimate criticism, but Bolton – a pathological advocate of American military intervention abroad – is hardly a credible defender of other nations’ sovereignty. Least not when, in the same speech, he mockingly included the Democratic Republic of the Congo as one of the nations that could have a say over the ICC’s influence in American affairs. 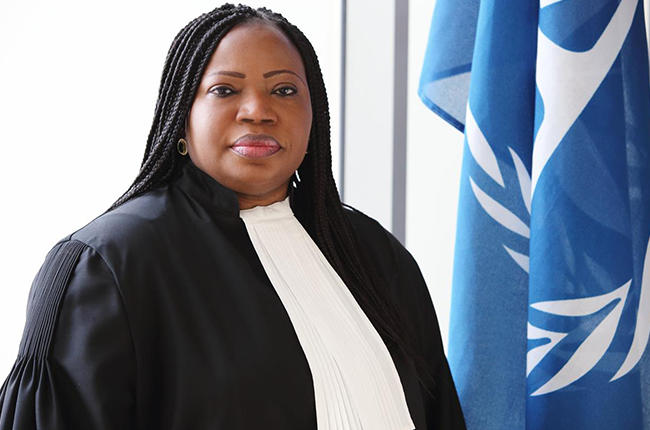 But more to the point, Bolton has been one of the most active figures in preventing the ICC expanding its remit beyond Africa. The grim reason that the ICC’s open caseload is so Africa-focused is because that is where it encounters the least resistance from major global powers. But – justifiably – this has dented the court’s claim to impartiality. The only way it can win back that claim is by opening a case closer to the heart of the powers on the UN Security Council. Investigating war crimes in Afghanistan – including alleged abuse of Afghan detainees by American forces – would silence the court’s doubters.

And ironically, Bolton’s threats will probably enhance support for the ICC’s pursuit of the case. Mark Kersten, a Fellow at the University of Toronto and an expert on the ICC told Al Bawaba:

“The ironic thing about Bolton’s speech is that he has made the Court out to be a genuine threat to global powers when many people criticize precisely for not challenging such powers. As a result, Bolton may have inadvertently lent the ICC credibility at a time when the institution is facing a number of challenges.”

There is no telling whether the Trump administration would actually allow Bolton to follow through on his threats. On the one hand, President Trump has pulled out of a number of international agreements and rocked age-old alliances for the sake of partisan gesturing before. On the other hand, Trump may conclude that the uproar and the legal ramifications of following through with these threats is not worth indulging Bolton’s obsession for, particularly when there is no clear national security benefit. Sergey Vasiliev added:

“The combination of Trump and Bolton might actually a winning combination for the ICC. Such a bellicose speech by someone who is widely seen as the ICC’s old arch-enemy with a personal, lifetime mission to undermine the Court, enables the Court to refill its political capital which got depleted somewhat in the past years due to conflictual relations with African states. A wider political support and commitment to the Court can reinvigorate it for bolder action than what it would have afforded otherwise – even if it is not likely to yield results in terms of arrests and trials of any US citizens.”

The ICC wants to be feared by those who might commit the worst of war’s crimes. Up until now, it’s been seriously lacking that credibility. John Bolton just gave it to them.