CPIJ Publishes an Expert Commentary on the Al Hassan Case

10 July 2020 – On 14 July 2020, the trial of Al Hassan Ag Abdul Aziz (Al Hassan) will begin before the International Criminal Court, marking a major step in the fight against impunity for international crimes committed in Mali. Experts from the Canadian Partnership for International Justice (CPIJ) prepared a commentary analyzing the Decision on the Confirmation of Charges, issued on 30 September 2019, as well as the most recent developments in this case. 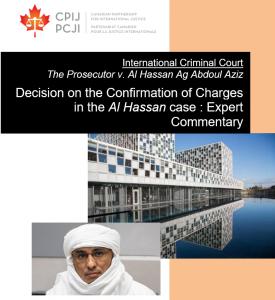 Al Hassan was a member of the coalition formed by the armed groups Ansar Dine and Al-Qaeda in the Islamic Maghreb. He will face charges of crimes against humanity and war crimes allegedly committed in the Timbuktu region between 1 April 2012 and 28 January 2013. CPIJ’s Expert Commentary highlights some of the most salient aspects of this important case, including the admissibility of the case in light of the gravity criteria and the accused’s hierarchical level, the precision of the charges, the application of international humanitarian law, the charges of crimes against humanity and the systematic character of the attacks, the historic confirmation of the charge of crimes against humanity of gender-based persecution as well as the respect for the rights of the accused.

This Expert Commentary was published this week in English and in French as four posts on the blog Quid Justitiae (here, here, here and here). The full version is now available online on both CPIJ’s and Lawyers Without Borders Canada’s institutional websites.